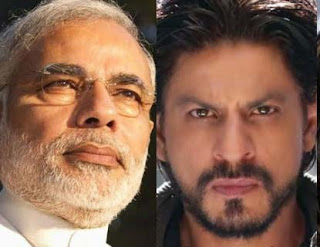 On his 50th birthday, Shahrukh Khan, so called superstar (because as per earning of the films, real superstar is Salman Khan) gave a series of interviews to ‘secular’ journalists Rajdeep Sardesai and Barkha Dutt. He told that yes, intolerance is increasing in country. And people started reacting against and favour of him.

So, why Shahrukh suddenly jumped in bandwagon of intolerant movement?

There are three reasons. Lets take one by one.

Shahrukh Khan is said to be very insecure person. Nowadays Salman Khan,  Akshay Kumar and Ajay Devgan have gone far ahead in terms of earning and giving hit films. So at this point Shahrukh’s reputation is at stake. He is in pressure to give hit film to continue in race of superstar.

His immediately next film will be Dilwale. It will be released on 18th December 2015. It will have to face tough competition with Sanjay Leela Bhansali’s Bajirao Mastani. Shahrukh and Sanjay’s -not so good relations- are well known in film industry. At time of Shahrukh’s  Om Shanti Om release, Bhansali’s Saavaria also released. Bhansali’s film didn’t perform well on box office. But since then, Bhansali has got stronger. His film has new and -lucky for success-pair of stars i.e. Ranvir Singh, Deepika Padukone and Priyanka Chopra. In this case, Shahrukh had to do a publicity stunt because his film has he himeself and Kajol in lead role which would be not liked so much in comparison to new age hRanvir and Deepika.

Shahrukh Khan’s showing insecure was evident in past many times. When Akshay Kumar was giving successive hit films with director Priyadarshan, Shahrukh Khan snatched him on his side and produced a film called Billu Barber. But Saloon and beauty parlour associations protested against title and ‘Barber’ word had to be removed from title.

After then Shahrukh Khan didn’t like hit pair of actor Ajay Devgan and director Rohit Shetty. So he brought Shetty on his side and produced film ‘Chennai Express’. Upcoming film Dilwale is also directed by Shetty. Shahrukh’s film Jab Tak Hai Jaan directed by late Yash Chopda was to be released on Diwali 2012 with Ajay Devgan home production’s Son Of Sardaar. At that time Ajay Devgan complained to Competition Appellat Tribunal for not getting enough single screen theatres. Shahrukh Khan apparently always tries to make Ajay jealous by showing physical proximity with his actor wife Kajol.

2. KKR case with Ed
It is well known fact that Enforcement Directorate (ED) has once again summoned on 28th October 2015 actor Shah Rukh Khan, the owner of the Kolkata Knight Riders franchise, in connection with the ongoing investigations into irregularities in the Indian Premier League (IPL).

Khan had been summoned in last May too, but he had sought time to appear before the investigating agency. Neither Khan nor any KKR official could be reached for comment. The actor was at that time out of town shooting for Rohit Shetty’s movie, Dilwale.

The ED is investigating two separate sales of shares by the KKR in 2009 and 2010 to Sea Island Investment Ltd, a Mauritius-based company.

The agency has alleged that the shares were undervalued. The allegations are based on a report submitted by chartered accountancy firm, Chokshi & Chokshi LLP.

As per Indian Express report, according sources, Chokshi & Chokshi was appointed to audit the value of the equity shares of certain IPL franchises to arrive at the correct valuation of the sales of shares.

A major contention of some of the IPL franchises is that sale of shares in the early days of the IPL was at a time when there was little in terms of valuations, with controversy surrounding the league.

So obviously Shahrukh had not liked this legal procedure which was not in place in UPA government to which Shahrukh Khan believed to have warm relations. 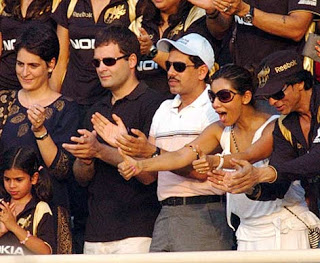 3. Closeness to Sonia G, Rahul G:
It is well known fact that Shahrukh Khan is very close to Sonia Gandhi family. It was publicly evident from the visuals/images/pictures of Shahrukh Khan-Gauri enjoying IPL cricket match with Rahul Gandhi, Priyanka Gandhi and her husband Robert Vadra. So Shahrukh Khan has jumped in present ongoing movement of trying to create image of Bharat (India) as intolerant under Narendra Modi’s government, on apparently behest of Congress and Sonia Gandhi.

Salman Khan moving ahead in life?

Why we need to remember Baazigar after 20...

Why did Shahrukh and Salman hug?

I was unaware of many of these things. Got nice information and reasons behind SRK's intolerance feeling.