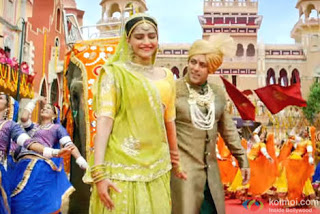 Prem Ratan Dhan Payo film by Sooraj Badjatya will be releasing on this Diwali. I could not resist my self from writing on its music album which is melodious and it is full of surprises.
First of all, in present age when most of films have only three or four songs, it has, like all previous films of Sooraj, 10 sons!
Second surprise is that it has not Raam-Laxman as music director who has given three musical hit films with Sooraj. Sooraj had tried Anu Malik in Main Prem Ki Deewani Hun but film music was not up to mark. It was more like Anu Malik type of music then Sooraj type of music.
Then Sooraj returned to Ravindra Jain who had long association with Rajashree banner. Sooraj and Jain gave good musical album of Vivah. Now Sooraj has brought in Himesh Reshmiya which seems because of Salman Khan. Salman Khan is god father of Reshmiya as well as Sajid-Wajid.
Another surprise is Palak Muchhal.
Palak Muchal voice in Prem Ratan Dhan Payo is so similar to Shreya Ghoshal.
Vineet Singh who participated in Saregamapa is so sweet giving rememberance of Mohd Rafi (ofcourse he can not match his level) or Sonu Nigam.
Very surprising fact is Himesh Reshmmiya who doesnt sing in his high pitch and nosal voice for this film. His song’s lyrics will be remembered for ever because it is about childhood. Song is well written.
Shaan song aaj unse milna hai will give first remembarance of Kishore Kumar’s song Aaj unse mulakat hogi but it is quite.
Jab tum chaho song is wife or girlfriend special. All wives would like it.
Overall, this music album is full of surprises.

Salman Khan moving ahead in life?

DPL will be as popular as IPL is...

Planned rivalry of Amir-Shahrukh and Salman?